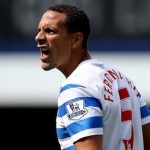 It has been reported that QPR veteran Rio Ferdinand has branded Manchester United’s sale of Danny Welbeck to Arsenal as “disappointing”.

Ferdinand was speaking with MUTV.

“I was surprised [at the move],” he said. “Gutted really. He’s a local lad and has come through from the under 8s. For him to leave was a little bit disappointing. I don’t think we’ve seen the best of Danny. He’s still got a lot more in him.

“I hope the Arsenal manager gives him the chance to be that responsible front man he wants to be. I’m sure you’ll see him flourish.”