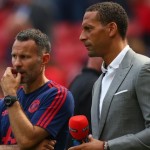 It has been revealed that Manchester United great Rio Ferdinand believes the club has no chance of achieving success this season.

“If I was a betting man I wouldn’t put money on United winning the Premier League and certainly not the Champions League,” said Ferdinand.

“They are very far behind Manchester City and they were a huge amount of points behind Chelsea last year and they are there or thereabouts with Arsenal.