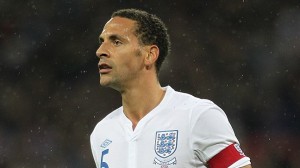 After three days of prevarication, the Manchester United defender met with England manager Roy Hodgson in London on Sunday evening ahead of the forthcoming World Cup qualifiers against San Marino and Montenegro.
Ferdinand told Hodgson that specialists who treat his ongoing back problem have warned him that to take a week-and-a-half off from his treatment programme would jeopardise his season.

I’m Gutted I had to pull out of england squad, but it was the right decision for my intricate pre-planned programme.

Ferdinand said: ‘It was important for me to be able to speak with Roy face to face and explain the situation, and one thing I made clear was that my passion and commitment to represent my country is as strong as ever.

‘It is disappointing that I won’t be able to play a part in the upcoming games but I told Roy that I want to continue to be available for England and I look forward to working with him in the future.’
Steven Caulker has been call up to the squad and Ferdinand’s decision will inevitably attract criticism after a somewhat ridiculous ‘will he/won’t he’ saga that has taken place ever since he was recalled by Hodgson last Thursday. Manchester United Complete The Signing Of Memphis Depay From PSV