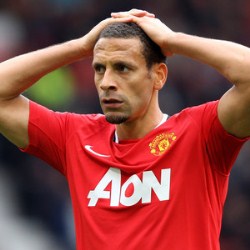 It has been revealed that Rio Ferdinand is shocked by his FA charge.

The Manchester United centre back has been left ‘dumbfounded’ by an FA charge over a tweet he made about Chelsea fullback Ashley Cole.

In the wake of John Terry’s racism trial, Ferdinand responded to a Twitter comment that referred to Cole as a “choc ice”.

A source told The Sun: “It is fair to say Rio is dumbfounded by this.

“He saw the tweet as a simple response to one of his followers rather than anything malicious and fears the FA is out of touch with modern-day social networking.”

Rio could be hit with a ban if he is found guilty of the improper conduct charge — although a £20,000 fine is more likely.