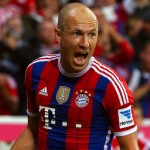 Reports are out claiming that Bayern Munich winger Arjen Robben has urged Martin Odegaard not to rush a decision about leaving Stromsgodset.

“The lad’s only 15…just let him play football,” the Dutchman told Kicker.

“At this age you just need to train, play and have fun. He’s just very, very young. And I think that a lot is headed his way. I hope that he makes the right decision. The most important thing is that those close to him remain calm.”