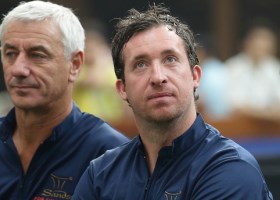 The 38 year old blasted Webb’s decision not to award Luis Suarez a penalty after the Uruguayan was sent tumbling in the second half at Emirates Stadium on Sunday.

“Our best ref apparently… How can you miss that,” Fowler Tweeted.

“Not clinical enough and ref needs to have a look at himself.. Shocking decision.”