Reports are out claiming that Robbie Savage is of the belief that Chelsea can win FOUR pieces of silverware in 2014/15 such is the strength of their squad. 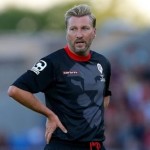 Jose Mourinho’s Blues are in a good position in the Premier League and Capital One Cup while they are strong chances in the Champions League and FA Cup according to Savage.

The former Leicester City and Derby County midfielder wrote in his column for The Mirror that Mourinho’s men have such a deep roster that anything is possible this season.

‘Chelsea are on course for the Grand Slam – a clean sweep of Premier League, Champions League, Capital One Cup and FA Cup – and it would be a brave man to bet against them in any of those competitions,’ wrote Savage.

‘Chelsea could win all four trophies because they have the best back five in Europe and arguably the best crop of strikers in English football.

‘I saw them win at Derby (in the league cup quarter-final) in midweek and it was another reminder of their quality in depth.

‘Diego Costa, Didier Drogba and Loic Remy is an embarrassment of riches up front, and they are going to take some stopping.’