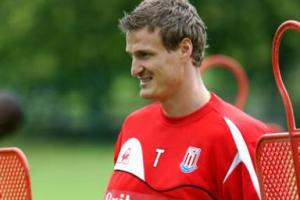 Stoke City defender Robert Huth faces a violent conduct rap which could plunge him into a three-match ban.

Robert Huth, now age 25, looks certain to be charged by the FA after appearing to aim a punch at West Ham’s Matthew Upson on Saturday.

The two players jostled at a 71st-minute free-kick when Huth floored Upson with a blow to his face.

Ref Martin Atkinson and his assistants failed to see the incident but FA bigwigs will review video evidence.

Hammers boss Gianfranco Zola said that Matthew Upson is okay but had a few stitches and that the incident was a clear sending off.