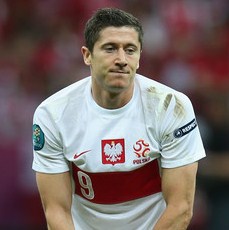 Borussia Dortmund striker Robert Lewandowski insists he is under contract with the German club.

The Polish international has been heavily linked with both Real Madrid and Manchester United recently but says that claims he is set to join either club, particularly Madrid, are way off the mark.

It is believed that Lewandowski’s agent has spoken with Madrid boss Jose Mourinho regarding the player but the Pole is not reading in to that too much.

“”My agent has been in demand,” Lewandowski told kicker-Sportmagazin. ”

“They asked him if he had a meeting with Mourinho because people have seen Mourinho in Warsaw.

“My agent then tried to make a joke, saying that Mourinho would sign me if I scored four times during Euro 2012.

“I do not care what my agent is doing. I am under contract with Borussia Dortmund. “