It has been reported that Arsenal legend Robert Pires believes the signing of Alexis Sanchez can help deliver titles to the north London club. 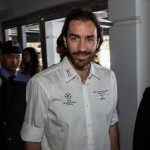 The Gunners secured the Chile international from Barcelona less than two weeks ago and his in-excess of £30million arrival at the Emirates Stadium has ex-winger Pires feeling confident of consistent title pursuits in the coming years.

“His preference for Arsenal is a big gesture for the Arsenal family,” Pires told the Daily Star.

“I’m very happy because the Arsenal board have signed a world-class star.

“I am sure Alexis will help to win titles. He played pretty well in the World Cup.

“I like his offensive skills and I believe he will fit very well to the system that Arsene Wenger has in mind.”