It has been revealed that Arsenal legend Robert Pires has likened Mesut Ozil to his former France teammate Zinedine Zidane. 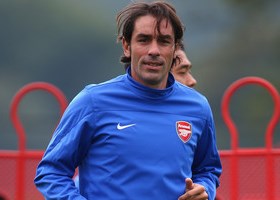 “I think that Arsene Wenger and Arsenal have signed a world class player in Mesut Ozil,” Pires told the official Arsenal Magazine.

“He is, in my opinion, the best No 10 in Europe. He has proven it with Real Madrid and with Germany. For me, he is exactly the player the team was missing.

“It is an amazing coup that Arsenal made this summer not only in football terms as Ozil will strengthen the team, but it will give the rest of the squad more confidence and opponents will fear Arsenal again. But also in terms of prestige as it proves that Arsenal is still a massive club.

“If I had to compare Ozil with someone I played with in my career, I think I would say that he has a bit of Zinedine Zidane in him, in terms of vision, touch and genius to make others play around him.

“Like all Arsenal fans who have been expecting a big signing like that for a number of years, I am very happy he is a Gunner now because he will be fantastic for us.”