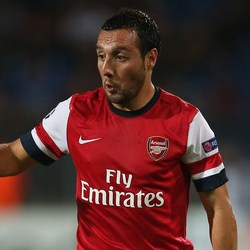 The 27 year old Spanish international midfielder made the move from Malaga to Arsenal in the summer and has been one of the most impressive players in the Premier League over the first month-and-a-half of the season.

As always, there is a risk bringing in a player from a different league and hoping he performs immediately but Di Matteo feels that Cazorla has been a revelation just like Blues midfielder Juan Mata was last campaign.

“There’s always a bit of concern when players come in from another league. It can take time,” he said ahead of Chelsea’s short trip to Arsenal tomorrow.

“We had the same experience with Mata last season, who really settled in very quickly.

“[Cazorla is] a very exciting player to watch, who’s made an impact in Arsenal’s team. He’s been a bit of a highlight so far.” Ancelotti : We Must Have Confidence In Fernando Torres!