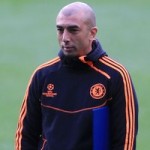 Chelsea boss Roberto di Matteo is happy to be leading club at Wembley for Sunday’s FA Cup semi with Tottenham.

Chelsea were far from pleased with the Spurs tie being scheduled for 6pm on a Sunday, days before they welcome Barcelona to Stamford Bridge in the Champions League.

But Di Matteo had put his “anger and disappointment” behind him today, saying: “I’m looking forward to the game now. I hope it’s going to be a great game.

“Any time you play at Wembley, it should be a spectacle because of the arena you’re playing in.”

Di Matteo could be forgiven for pinching himself at managing a team in a Wembley semi-final barely a month after taking charge.

Chelsea’s two-time FA Cup-winning hero said: “It certainly was a dream to be able to take the club you played for to a semi-final at Wembley.”