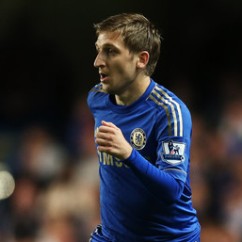 Reports are out claiming that Chelsea boss Roberto di Matteo may throw Marko Marin into the action tonight against Manchester United.

The 23 year old German international is available for selection, with Frank Lampard ruled out due to a calf problem.

“Frank is going to be out for a few weeks. He’s got a calf problem, so we will miss him and it’s a big loss for us,” Di Matteo said.

“Apart from him everybody else is fit. Marko Marin might be in the squad for Sunday.”