Reports are out claiming that Hoffenheim midfielder Roberto Firmino is resisting interest from the Premier League. 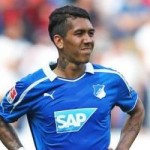 Arsenal, Chelsea and Liverpool are all keen on the Brazilian.

However the 22 year old used a joint interview with strike partner Kevin Volland for Bild to confirm his intent to stay at Hoffenheim.

When asked whether they had played their last game for the club, Volland replied: “This is not an issue for me. I have a contract until 2017.”

Firmino responded: “Me too.”