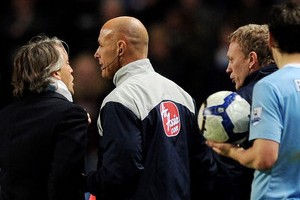 Manchester City boss Roberto Mancini and Everton manager David Moyes almost came to blows and both managers were sent-off for their bust-up during Everton’s victory at Eastlands.

The remarkable incident was sparked by Moyes, who caught the ball ahead of making a late substitution.

Mancini interpreted the Scot’s action as time-wasting and went over to remonstrate angrily.

Fourth official Howard Webb intervened and after Mancini had finally been becalmed, referee Peter Walton sent both to the stands.

The Football Association will now await Walton’s report before considering whether further action is necessary.

Mancini has since apologized to David Moyes for his actions. 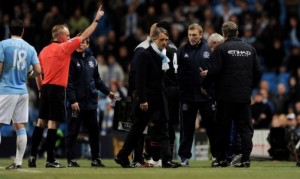