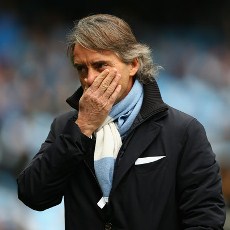 Roberto Mancini is confident that Manchester City can produce a Premier League title defence despite losing 3-2 to Manchester United on Sunday.

The reigning champions fell six points behind their neighbours as an Wayne Rooney double allowed United to skip away with a two-goal lead before Yaya Toure and Pablo Zabaleta got City level by the 86th minute.

Robin van Persie stepped up to score with a free-kick in injury-time which deflected off Samir Nasri to give the Red Devils a nice breather at the top of the table but Mancini believes City can fight back and claim another crown.

The Italian said : “Even though we have lost this game we have shown we can win the title this year,”.

“It is clear, we need to work hard and stop making mistakes. We can’t continue to go one or two goals behind because it is difficult to recover.

“We have a good spirit. Now we need to win four or five matches in a row.”