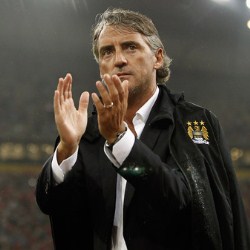 The Manchester City boss has now confirmed his interest and City have asked Arsenal to keep them informed of developments.

But the Italian said: “When you talk about Manchester City, Manchester United and Juve, it is difficult for a player to choose between those three clubs.

“They are all top teams and I’ve no idea what will happen with him. If we have a chance to take him, we will try because we think he is a top striker.

“For now he is an Arsenal player and I think Arsenal are a top team. It is not easy for Van Persie and other players to leave them.” Arsenal To Battle Man Utd For Italian U21 International Defender