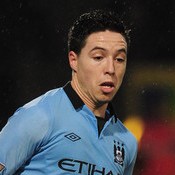 Roberto Mancini insists Samir Nasri did not deserve to be sent off in victory at Norwich City.

Things got ugly again just before the break when Bassong upended Nasri on the far touchline.

The duo squared up face-to-face, with Nasri pushing his head into the Norwich defender – which on consultation with the assistant referee resulted in a red card for the France midfielder, and a caution for Bassong.

The Manchester City boss lamented: “Both players came forward with their heads, so if you are going to send off one, then you have to send off both, not only Samir.

“Samir said he touched his head, okay, but the other player has done the same.

“The linesman has a big responsibility also, because it was not a good decision, it is incredible. You want to send off both players? Then, okay, the referee was there, he saw everything. The linesman was behind [the players], he could not see.

Mancini continued: “I am disappointed with Samir, and he will pay his fine, but the decision was not correct. Samir did a mistake, okay, but after why when the other player did the same thing, does he send off only one?

“There are two rules for different teams, and I hate this in football and cannot accept this.

“In life, there is only one rule for everyone. This season, I have seen things which are not good.

“For the referees, this is the most easiest thing to do, but I do not want to talk about the referees too much, because I said last time that they had a big lunch for Christmas, and I don’t know what [will happen].”

Vincent Kompany : Title Out Of Our Hands!