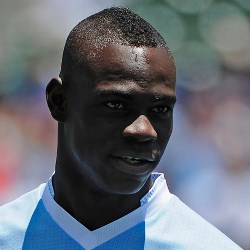 Balotelli’s best performances in a City shirt have both been at ­Wembley. He excelled in the FA Cup semi-final win against Manchester United in April and was man-of-the-match when City lifted the trophy by beating Stoke the following month.

However a posse of United players were incensed by his celebration at the final whistle and Mancini was forced to race on to the pitch to intervene when Rio Ferdinand lost his cool.

Mancini said: “I am sure Mario will behave well when we play United because when he plays for the team he is a fantastic player.

“He was focused when we beat ­United in the semi-final and I think he will be focused again.

“I hope so because he has everything to be a top player. When he thinks about things with his head he is one of the best.

“That’s the thing with Mario. He is an absolutely fantastic guy.

“I don’t say that because I bought him or because he is Italian, but off the pitch he has an incredible ­personality.

“He is very kind with people and it is important that in all the times I have spoken to him not once has he said that he wants to leave Manchester.”