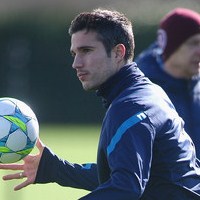 The Eastlands club have signed Samir Nasri, Gael Clichy, Kolo Toure and Emmanuel Adebayor from the North Londoners in the last three years.

However Mancini knows Dutchman Van Persie, 28, will come at a hefty price.

“He said: “If he leaves I don’t think he will be cheap because he has one year left on his contract. ”

“If, for example, you wanted to buy Napoli’s Edinson Cavani he would be maybe £30million.

“I think Van Persie will sign a new contract. He is Arsenal’s best player and it is difficult for them to give him to another club.

“If there is a good player who wants to leave a club, then we are interested.

“I think he is a fantastic striker but I think he will remain with Arsenal.”