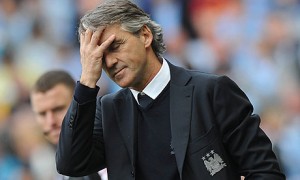 Roberto Mancini says Robin van Persie could be the difference in Manchester United’s bid to wrest the title from Manchester City, with the Italian revealing his frustration over failing to sign the striker three months before his August transfer to Old Trafford.

Since joining United from Arsenal for £24m Van Persie has made an enormous impact, his 14 league goals a significant factor in United’s seven-point lead over City. Mancini, whose side host Stoke City on New Year’s Day, said: “At this moment Robin van Persie is a very important player for United. He has scored 13 or 14 goals and it is clear he has changed their situation. At the moment, he is the difference between us.

“We were very close to signing him, I know what the reason was but I won’t say. It was not about money. We wanted Van Persie because we knew he was totally different from our other strikers. We wanted to improve our team, particularly for the Champions League. We were very close and we were sure it would be very good for us but it didn’t happen and now we can do nothing about it. We were very close three or four months before he went to United.”

On joining United Van Persie said he had made the choice with his heart. But Mancini said: “I don’t know if he listened to his heart. He took his decision but three or four months before that we were there.”