Reports have emerged claiming that Inter Milan coach Roberto Mancini has hinted he wants a new midfield signing after their 1-1 draw with AC Milan. 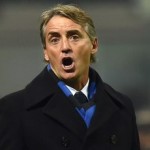 The 49 year old was asked whether he has a deep-lying midfielder in the squad or needs to sign one in January.

“I also had a few players out injured, so I don’t know all their characteristics that well. I remember M’Vila was able to play there, while Hernanes is also not 100 per cent fit.

“The system with three up front also had to work hard defending, so the balance will come with time. We often lost the ball with misplaced passes and of course that should not happen.”

Mateo Kovacic was disappointing and struggled to find his position.

“He is a young player who will learn through mistakes, so we mustn’t put too much pressure on him. Playing behind two strikers, wide of the trident or in midfield, I think he can do it all. He has to learn, for example, not to take eight touches to do something simple.

“We wanted to win the derby, but I am very happy with the way the team played.”