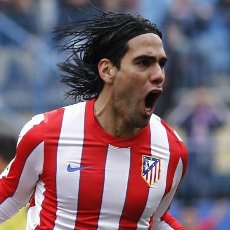 The Daily Star revealed that the Italian tactician has been told he MUST sell at least one of his strikers if he wants to land £45m-rated Falcao.

And the word last night was that £27m Dzeko – despite repeatedly stating that he wants to stay – is the most likely to be sacrificed.

City are gearing up to compete for Falcao in January if the auction kicks off in the next transfer window.

Otherwise, it will be a summer shoot-out between City, PSG and Chelsea.