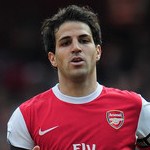 Sensational news are out and it has been revealed that Manchester City boss Roberto Mancini is launching a bid for Arsenal captain Cesc Fabregas.

The Eastlands club clinched a Champions League place last night thanks to Peter Crouch’s own goal, which gave them a crucial 1-0 win over Tottenham

However when asked which player would make his side Premier League champions next year, Mancini replied: “Cesc Fabregas”.

The Arsenal skipper is already being hunted by Barcelona, where he started his career, while the Gunners insist they will not sell.

But they would find it hard to resist a bid of around £50million, which would take Mancini’s spending at City through the £200m barrier, says The Sun.