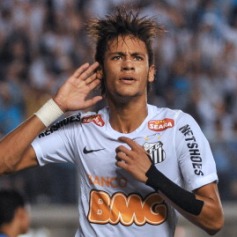 There have also been claims in Spain that Barcelona have paid a large down-payment to secure his signing.

It has left Mancini confused over whether City have a chance to sign a player regarded as the successor to Lionel Messi and Cristiano Ronaldo as the world’s best.

He hopes Txiki Begiristain, until recently sporting director at Barca, will provide some answers when he starts work at the Etihad this week.

“I have read that Barcelona have bought Neymar but I don’t know if it is true,” said Mancini.

“But I am very happy to work now with the new sporting director because he may know situations that I don’t, and we can move very quickly regarding some players.

“If we work well in the next three or four years, Manchester City can be very strong.”

Joe Hart To Remain As England’s No.1 Goalkeeper