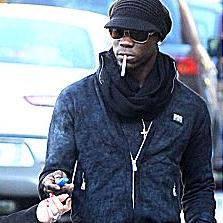 Roberto Mancini is shocked that Mario Balotelli has taken up smoking.

The Manchester City boss reckons Super Mario could improve his red-hot form if he gives up the bad habit for the new year.

Asked if he knew Balotelli liked a drag, Mancini said: “Yeah, I know he smokes.

“For me it’s not OK but I’m not his father or his mother.

“I told him that it is better if you don’t smoke. I am always against cigarettes and, for that reason, my son doesn’t smoke.

“There are players who smoke in Italy and also here. I don’t think he smokes a lot, maybe five or six a day. But I’ve told him.”

Balotelli was famously involved in an incident where fireworks were let off in his Cheshire home on the eve of October’s Manchester derby.

And Mancini quipped: “Maybe he uses cigarettes to light up the fireworks!”

Hughes Out, Mancini In at Man City