It has been reported that Roberto Martinez was delighted with the depth his Everton squad showed in beating Manchester United 2-0 at Goodison Park on Sunday. 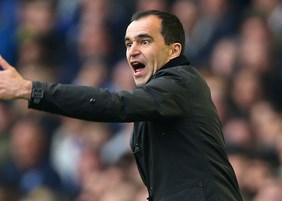 The Toffees were playing their third match in nine days when the Red Devils came to town, in comparison to David Moyes’ men who had an 11-day break since their Champions League quarter-final loss to Bayern Munich.

First-half goals from Leighton Baines and Kevin Mirallas allowed Everton to bounce back from the midweek defeat to Crystal Palace and the efforts of the players were certainly not lost on Martinez.

The Spaniard said : “We had to be very clever in using our energy right,”.

“They had 11 days since their last game but we’ve been able to use the squad and I think that’s been very important.

“The whole squad has been involved and that has been a difference probably.

“It’s an important balance between having players who are fresh and players who have been contributing.

“I think we have the right balance with the squad now going into the final games of the season.”