It has been reported that Everton boss Roberto Martinez was pleased with Lacina Traore’s performance on debut in their win over FA Cup opponents Swansea City. 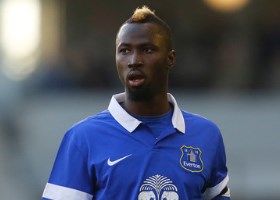 Martinez handed the Ivory Coast international a first Everton appearance in Sunday’s FA Cup tie and he marked the occasion by opening the scoring inside four minutes of the 3-1 win.

“I was really pleased,” the Spaniard told evertontv.

“I think he has been working really hard behind the scenes to allow himself to get fully fit.

“It was the perfect game for a striker to come in and get tested. It was Premier League opposition and you know that Swansea are going to test the discipline and concentration of the forward line because they play from the back. I thought Lacina took on board all the instructions and responsibility and so I was very pleased with that.

“You can see he is a completely different type of player than what we have got in the squad – he has real pace to burn, movement in the box and a clinical finish. Overall it’s a nice positive sign.”