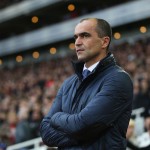 Reports are out claiming that Everton have sacked manager Roberto Martinez.

BBC Sport says the club are expected to make an official announcement imminently to confirm their decision.There have been an increasing number of protests against the Spaniard from supporters at recent home matches.

Martinez had been three years in charge at Goodison Park.

Over the past two seasons Everton have won a combined 22 league games – just one more than in 2013-14.

They have conceded 18 points from winning positions this season – only Tottenham with 20 and Liverpool (19) have a worse record.

Martinez began his managerial career at Swansea in 2007 and oversaw promotion from League One in his first full season in charge before joining Wigan in 2009.