Reports are out claiming that Everton boss Roberto Martinez has called on his players not to dwell on their FA Cup defeat at Arsenal. 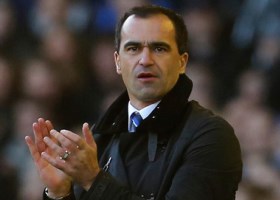 The Spaniard insists they still have plenty to play for in the Premier League.

The 40 year old told evertontv : “It’s an important time in our season,”.

“We can focus on the league and we have 33 points to fight for.

“Once we get the Crystal Palace game rearranged there will be six fixtures at home, so it’s an important moment in our campaign.

“We have to make sure we finish as strong as we can.” I Was Ready To Stay With Arsenal – Lukas Podolski