Reports are out claiming that Everton boss Roberto Martinez is urging Romelu Lukaku to think long and hard about his future at Goodison Park. 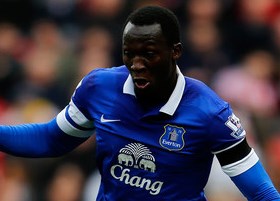 The on-loan striker will be sold by parent club Chelsea this summer.

Martinez said: “I think there is something we can give that he can’t get elsewhere, it’s enjoying his football.

“In football, as a player, you can take football happiness for granted quickly. As a young man, to be important in a football club and being happy is vital.

“Nobody can guarantee you that unless you’ve experienced it, or know who you are going to work with.

“I know players in the past who have moved clubs because they want to win titles and they leave a club and then the club they left win the title.

“He wants to be presented with a challenge that he can enjoy and he can develop, and that’s top and bottom as a player.

“He’s a grounded and intelligent young man, who is not going to be swayed by the materialistic aspect of the game or something that has got no substance.”