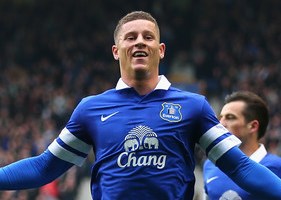 It has been reported that Everton boss Roberto Martinez has told Ross Barkley the best place for him is Goodison Park.

The Spaniard is adamant that the England international is going nowhere.

He said: “Ross knows he needs to stay at Everton. He knows that playing in Europe next season and having an even bigger role next season is a normal step.”

Manchester United, Manchester City and Chelsea have all registered their interest in the talented 20 year old. Ross Barkley One Of The Best I’ve Seen! – Arsene Wenger