Tottenham striker Roberto Soldado has declared that a home win against Europa League opponents Besiktas is crucial to their chances this season. 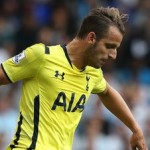 The Spanish international is under no illusions about how tough a game it promises to be having seen Besiktas run Arsenal close in the Champions League Play-Off Round at the beginning of the campaign.

“This game is really important for us because it’s at home and always when we play at White Hart Lane we need to win,” said the Spaniard, who has scored two goals in five appearances in all competitions for us so far in 2014-15.

“We know that Besiktas are a big team and they showed their qualities against Arsenal while playing for a place in the Champions League.

“Now we play them at home and we need a win after we drew 0-0 in Partizan. We want to qualify in first position in the group, so we need to win this game to get the three points.”