It has been reported that Manchester United striker Robin van Persie has revealed he hasn’t been fully fit for six years. 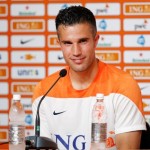 The former Arsenal striker was forced out of the Netherlands’ final warm-up friendly against Wales with a groin twinge and appeared to be struggling in training over the weekend.

Van Persie said: “I can’t remember a game over the last five or six years where I haven’t felt some pain somewhere.

“The groin complaint I had you can’t even call an injury. I’ve had so many of those complaints.

“I’m no longer bothered by my groin and I have been able to give my all in the training sessions.

“I’m completely ready for the game against Spain.