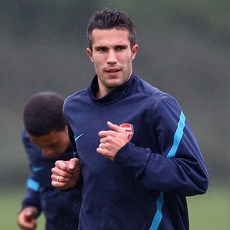 Robin van Persie has declared that morale needs to be maintained as there is still plenty to play for.

The Gunners were victorious in midweek over Shrewsbury in the Carling Cup which eased some of the pressure on boss Arsene Wenger after following a dismal start to the campaign, including a 4-3 reverse at Blackburn last weekend.

The Dutch international striker said: “It is important that we stay positive – that can be hard because everyone is frustrated and we realise that this is our worst start in the league for a while, but we have to stay together, be strong and make sure not to hide or become introverted.

“Games like Saturday’s happen, but we must not go into our shell.

“We should be proud of who we are and aware that we are only five games in with so much still to play for.”

Van Persie also accepts there has to be an improved collective effort.

“The facts are we went in front twice (against Blackburn) and didn’t defend well enough thereafter,” he said.

“It is strange because in earlier games, Udinese being a classic example, we had managed to do it – fighting for a good result and keeping it. Now we have to show people we can do it week in, week out.

“Yes, we were a bit unlucky at Ewood Park, but I am someone who believes you bring luck to yourselves – and scoring two own goals is not down to bad luck.

“We don’t blame individuals, but we have to look a bit more closely at things.”