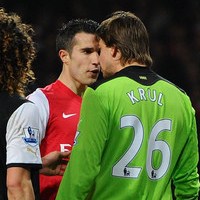 The pair had to be separated at the end of the game but the word is they have been exchanging friendly texts and want to put the matter behind them.

A source close to Krul told the Daily Star Sunday: “Van Persie and Tim have been texting each other this week and are now laughing about it.”

“It’s all forgotten as far as Tim is concerned and we’re hearing from Arsenal that Van Persie feels the same way.’’

A Newcastle source added: “Tim is an ­absolutely brilliant guy and all this was way out of character for him. He didn’t feel he was wasting time but Van Persie obviously felt he was.

“Tim felt that Van Persie was trying to belittle him but he has already moved on and is looking forward to going to Euro 2012 with him this summer.

“The last thing the Dutch coach, Bert van Marwijk, wants is any trouble between probably the most powerful member of his squad and a young keeper who has emerged as one of the best in the Premier League.

“But we can assure him it’s all over now and was just something that happened in the heat of the moment.’’ Liverpool Urged To Increase Squad To Compete With Chelsea, Arsenal