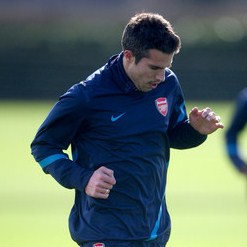 The Daily Mail says Real Madrid, Barcelona and Manchester City are baulking at the astronomical numbers associated with a bid for the 28-year-old.

As well as Arsenal demanding a transfer fee of more than £20million, sources in Spain claim that Van Persie wants to be paid in line with top earners such as Lionel Messi and Cristiano Ronaldo, who receive weekly wages upwards of £275,000.