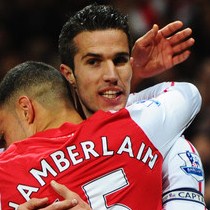 Reports have surfaced that Robin van Persie is keen on joining Cesc Fabregas at Barcelona.

El Mundo Deportivo has reported that the Arsenal Captain, now age 28, wants to be winning silverware and is well aware of Cesc’s success already at Barca, where he has collected three trophies since his summer move.

It’s claimed a deadline day move today cannot be discounted by Barca – though it is unlikely with coach Pep Guardiola happy to go with what he has.

However, Barca will be front of the queue in June when Van Persie’s contract enters its final 12 months.