It has been reported that Manchester United striker Robin van Persie has spoken of his admiration for Holland teammate Memphis Depay. 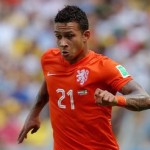 Earlier this week, the PSV Eindhoven admitted he was aware of interest from United, Tottenham and Manchester City.

RvP said: “You always have the feeling the youngsters can also make a difference.

“What I like about Memphis is that he picks things up so quickly. It is not so easy to be here at a World Cup because the level is so high. Every day, the maximum is required of everyone – including him.

“What he is doing is very mature for his age. It’s a childhood dream. We do click well and I really love his beautiful style of play. Off the field, we also talk a lot about football.