Reports are out claiming that Manchester United boss Louis van Gaal has handed Robin van Persie three weeks off after his World Cup campaign with Holland. 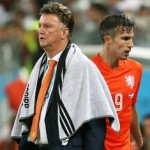 The Daily Mail reported that the Holland striker revealed that he was in need of a break after the Dutch finished third at this summer’s World Cup.

The former Arsenal striker missed eight games towards the end of last season for United and was running on near empty during Saturday night’s win against Brazil.

“I need that,” Van Persie said. “It was a tough tournament. Every match I gave it my all. That was just it, more wasn’t possible.”