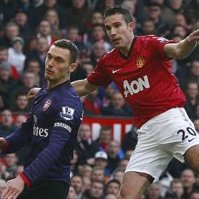 A mistake by Gunners defender Thomas Vermaelen opened the door for the Dutch international to blast in the goal in the 2nd minute of the match at Old Trafford.

Robin van Persie however did not celebrate scoring the goal in respect for his former club. Per Mertesacker Wants Arsenal To Step Up In The Champions League