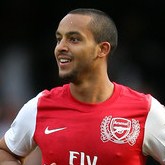 The flying Dutchman thinks the special connection he shares with Walcott is ‘vital’ to his attempt to prolong his blistering scoring run.

He told the Mirror: “After every single goal, people ask me, ‘Who gave the assist?’ I just say, ‘Who do you think?’

“We have that connection. I know what he is going to do, which is very important.

“It’s vital to have a player around me, as a striker, who knows where I move, how I move, do I want the ball into feet, do I want it behind?

“He knows where to find me. Stuff like that is vital.”