Reports are out claiming that Manchester United striker Robin van Persie has been impressed by Ajax youngster Davy Klaassen during Holland squad training this week. 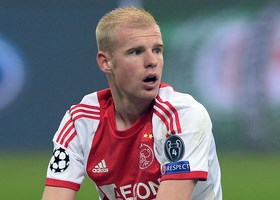 The 21 year old attacking midfielder has been linked with Arsenal and Manchester United in recent weeks.

The former Arsenal striker was impressed by the youngster against Barcelona and remarked to NUSport: “That one moment in the closing stages, when he decided to stick the ball in the corner. He was not just stalling.

“Klaassen did that very cleverly. If you’re so young and making such choices in such a contest, then you’re clever enough. I liked that.”