Reports are out claiming that Holland national team captain Robin van Persie has made it clear that he and his teammates are fully prepared for the World Cup. 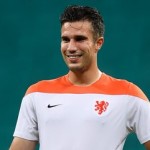 The Oranje take on reigning champions Spain in their Group B opener in Salvador on Friday afternoon and the star striker insists Louis van Gaal’s side is ready for action against an extremely dangerous opponent.

The former Arsenal striker told www.onsoranje.nl : “We are looking forward to it and are really eager to get started,”.

“I have faith in our team, if we – and I mean not only the players, but also the staff and the Dutch press – can say that we have had a very nice tournament, then whatever the outcome, for us the World Cup will have been more than successful.”

As for his own fitness, the Manchester United ace said: “The last few days I have trained fully and so have no more problems. I am ready for it.

“Besides, for six years I have been playing with aches and pains, there is always something and I have learned to live with it.”