Robin van Persie is confident that Louis van Gaal will get it right at Manchester United. 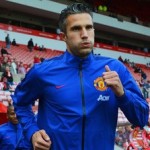 The former Arsenal striker returned for yesterday’s 1-1 draw at Sunderland.

“I worked with him for two years, and he’s very clear,” he said.

“He’s clear in what he asks of each player in the team every day. So, where I can, I will help the other players.

“I think that everyone has faith and everyone believes in the staff and players. We have great players, and it’s just a matter of time before the points will start coming in.” Man Utd Winger Nani On The Brink Of Joining Fenerbahce