Reports are out claiming that former Manchester United striker Robin Van Persie has made his first appearance for new club Fenerbache in their 0-0 draw with Shakhtar Donetsk on Tuesday night. 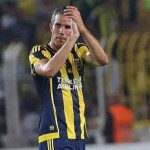 The ex-Arsenal star joined Fener on a three-year deal from United last week and was introduced from the bench in the 68th minute.

Despite playing over 20 minutes for his new side, the Dutchman was unable to inspire his teammates to victory over Shakhtar in their Champions League qualifying third-round tie.

Van Persie will hope to start when his new team head to the Ukraine for next week’s second leg return bout and will look to play a decisive role in Fenerbache qualifying for the Champions League group stages.