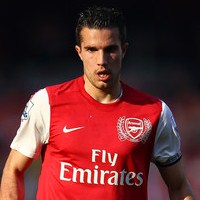 Arsenal skipper Robin van Persie has no interest in a move to Juventus.

The Daily Mail says Juventus have become the first major European club to publicly state their intention to sign the Holland striker.

But Van Persie will reject the attempt to lure him to Italy as he does not deem a move to Juventus as a significant step up from Arsenal.