It has been reported that Robin van Persie was proud to be Manchester United’s matchwinner against Arsenal yesterday.

The Dutch international striker headed home the only goal of the game in the first-half. 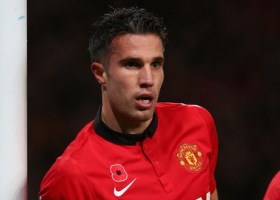 Speaking to MUTV, Van Persie said: “We could have been 11 points behind, so now we’re in a good position. It was a big win, a real six-pointer. We are right in the mix, which is what we wanted. We knew what the other teams had done before us, and realised that it was a must-win game. I always think positively, and I’m thankful that we did that today.”

The Dutchman found the net from a Wayne Rooney corner with 27 minutes gone and was subsequently full of praise for his strike partner.

“It was a good corner from Wayne. After I made contact with my head, I think it brushed my shoulder, but it didn’t really matter. It was a good goal, and I’m very happy to have scored. Wayne is a great player, and he worked really hard, as everyone did today. I don’t think it is enough for a couple of individuals to play well, I think you need to be strong as a team, that’s what we did today.”