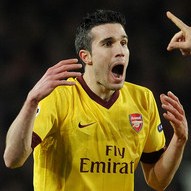 Robin van Persie has said that Arsenal feel “betrayed” after he was controversially sent off in defeat at Barcelona.

The Dutch striker received a second yellow card for kicking the ball after the whistle had been blown and in a post match interview, Van Persie labelled his red card “a total joke”.

“I think it’s a total joke – how can I hear this whistle with 95,000 people jumping up (and shouting)?” said Van Persie.

Just a second elapsed between the referee blowing his whistle and Van Persie striking the ball, and the latter continued: “That makes it even worse. I cannot understand that view from the ref.

“If there were four, five, six seconds in between, you can make a check (for offside). One second, it’s a joke.

“I tried to explain there were 95,000 people jumping up, how can I hear the whistle?

“He’s been bad all evening, whistling against us. I don’t know why he’s here tonight.

“We feel betrayed a bit, when it was 1-1 it was all to play for and in my opinion this referee killed the game.”